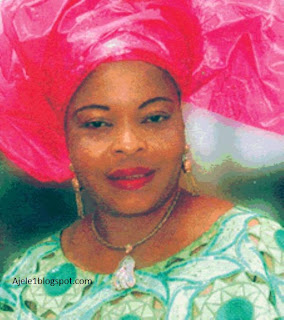 Toyin Adegbola populary knows as Ajoke Asewo to re Mecca’, is one of the actresses who have seen it all in the industry. She was born in Offa, Kwara State, but she is from Osun State and started  elementary school there. She happen to be one of the last set of primary seven then
.
she attended secondary school, after her modern school. After this, she proceeded to a technical school. she said she wanted to go for Nursing after her secondary school but she was not given the chance. She studied Electronics at the Technical School and passed the Open Grade Test and other external examinations
She was a visible part of the just held Festival of Indigenous African Language Films (FIAF) which ran for four days, between October 2 and 5, in Akure the Ondo state capital. Oluwatoyin Oluwaremilekun Victoria Arike Adegbola nee Babatope mixed freely with the over 2000 guests that the festival, organized by Remdel Optimum Communications limited, pulled. The younger actors some of whom enrolled  in the scriptwriting workshop of the festival won’t let her be. They swarmed on her each time she appeared, why some want her to sign autographs and others a memorable snap shot. A leading player in the Nigerian motion picture industry and a pioneer in her own right, Toyin has been receiving that star treatment since she made her debut on screen in the optical film Ejo N’gboro produced in1983. Holder of several chieftaincy titles including Yeye Oge of Gbagi land, Yeye Lua and Yeye Bobajiro of Igono land in Oyo State became hugely popular and earned the alias ‘Toyin Asewo To Re Mecca’, the title of the flick that shot her up. She spoke with Shaibu Hussieni on her life and acting career.

Q= Most of you do not like attending festivals, but you are here and you stayed for four days?

A-. I had realize that we need to be part of events like this to be able to network and to learn new ways of doing things. There is so much that has been said here about our industry that I didn’t know prior to now. so festivals for me are learning fields and I am glad I was able to make it to FIAF 2011. I thank Mr. and Mrs. Ibitola of Remdel for the opportunity to be here. This is my first time of attending the festival and I am sure all of us have learnt one or two things.

Q=But you have been absent from the scene for sometime now?
A-I have been working but not as much as I used to do and that is because I have been called to serve my people in a different ways. In fact, in nutshell  I am involved in politics. My people here in Ondo state have invited me to come and serve them so that has occupied me. But I still find time to do some work, acting and produce movies. I just accomplished  work on my new movie, which is due for release soon. So I am still around and no matter how involved I will get with politics, I will still find time for my first love, which is acting and filmmaking.
Q=Where is your dad  from and your  late husband is from and what are you doing in Ondo?

A-My mother is from Ondo State and I have lived here almost all my life and so I have a right to contest any election here. But I am originally from Osun State, my late husband was from Oyo an then I was bred and buttered in Offa, Kwara State. So, I can conveniently operate from these areas without hassles. But I worked a lot in Ondo State during the last election and I have stayed back to serve them. And by the way politics runs in my family. My elder brother is Chief Ebenezer Babatope, a seasoned politician and a member of the ruling People’s Democratic Party (PDP). I have another brother who is a leader in the Action Congress of Nigeria (CAN). So politics runs in my family.

Q=How did you get into screen acting?

A-I was working as a civil servant- a technician with the Broadcasting Service of Oyo state (BCOS) when I was invited to be part of Ejo N’gboro. I must have impressed the producer with some of the things I did on stage then,  I also worked on stage and also with my activities at BCOS and I also presented some programmes on radio. When I was invited to be part of Asewo To Re Mecca, which was about the first home movie production in Yoruba language to be shot. It was released long before Living in Bondage was produced. So I am a pioneer. So, when I got on location, I was just told what to do and I never knew that it would come out so good and will give me so much fame.One day after we completed working on the movie, I went to see Oga Bello in his office and I ran into the marketer of the movie who impressed by my effort gave me N5000, which was a lot of money to me at that time . And I was surprised because I was not even the real Asewo in the movie. I was only introduced to prostitution in the movie by the character that was played by Sola Sobowale. From then on, they started  calling me Asewo to Re Mecca, however  At first, when people called me by that name I usually got very angry but  I later realized that I couldn’t help it. So, I let them call me. In fact now, I am the first to introduce myself as Toyin Asewo To Re Mecca because it has stuck.

Q=How did your husband  react to that role?

A-Well at first, they raised eyebrows but later they accepted the fact that it was mere making believe. Initially, my late husband expressed reservation but he later said that I should be careful about the roles I played in movies because of what people says not he would say about such roles considering the fact that I was married. When my elder brother Chief Ebenezer Babatope saw the movie, he was not sure I was the one. So he called me and asked me and I said yes I was the one and he frowned a bit at it but I thank God that today he is my biggest fan and a great supporter of all I did.

Q=How many  movies have you participated  in and what has been your staying power?

A-I have even acted in more than a hundred movies. In fact, I have lost count and it is even difficult to say which one is most memorable now because each one had its own challenges. I still remember works like Toyin Tomato, Mayowa and Oroli Oko and many others. and as a producer, I have produced well over 12 films. We just finished work on Ijo Nla that was shot completely in Ondo State. And as for my staying power, I will say it is God, my family and fans. I architect  all my strength from God and enjoyed the support and encouragement of my fans. a lot. I will not also forget the role that my late husband Anthony Kolawole Adegbola played. He gave me all the necessary support during his lifetime. so I thank God, my fans, my late husband and  my family. I also have some mentors like Uncle Feso Oyewole, Chief Adebayo Salami, Alagba Tobunson Odunsi, Mama Grace Oyin Adejobi, Mama Biodun Duro Ladipo late Chief Adeyemi Afolayan aka Ade Love who invited me to location even when I was in school

Q=Is there any beauty routine? You have kept that made this radiant look for decades now?

A-Well I don’t have any special beauty routine and I don’t have any special food that I eat. The only thing I know I don’t eat is red meat. Once you are over 40, it is adviceable that you shun red meat. apart  from that, there is nothing eatable that I cannot put into my mouth. as for what I do when I am not working, I just stay at home. I am a homely person. I just stay, watch movies, read novels, listen to gospel music and attend to my children. unfortunately none of them is into acting for now. Only the last child has shown tremendous interest but she wants to be done with her studies before she come into  the industry. She is studying accountancy now in  university here in Nigeria.