PASUMA WONDER I AM SUPERIOUR TO YOU --OSUPA 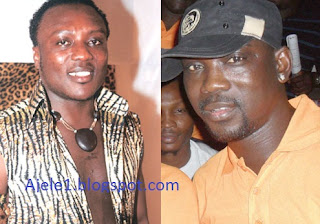 Pasuma Wonder is the poster child for contemporary in Fuji musician even though some will argue that Saheed Osupa is exactly  as well as pasuma.  Pasuma has been on that tip for years.


He is credited with bringing Fuji closer to a younger generation (Remember him from Celebrity Takes Two) as well as making strong efforts to make a cross over, as evidenced by his work with mainstream acts like 9ice, Olu Maintain and now Tha Suspekt.
Saheed Osupa and Pasuma Wonder are bosom  friends and talented in Fuji musician Saheed Osupa and Pasuma are the face of Fuji musician, by elevating  the Fuji music to the highest level that has earned them many individual awards. Saheed Osupa is the best Fuji musician formally  while Pasuma still remain an undisputed Champion in the industry for his dominary spirit over Fuji music.
they both gain fans through their albums and live shows that exist inthe industryThe similarities between Pasuma and Saheed Osupa are their ability to make use of street slang to compose lyrics and complementary beats to fit their fans.
Although they are both different in style of singing Pasuma lay much emphasis on pure slang’s and electrifying beats which attracts energetic dancing steps. Also there is an element infusion of hip hop in Pasuma’s Fuji which is  accepted by his  fans as an extension of Fuji music. On the other hand, Osupa, is deeply rooted in cultural and tradition Fuji acts, he has been able to diverse his lyrics and rhythms on idioms and proverbs as a typical indigenous of yoruba  musician. His beliefs in tradition and cultural, has made him to be more conservative in his lyrics composition which has earned him many fans but home and abroad . His ability to sing Fuji music according to how it was found in those days given him a lot of musical titles as a mark of achievements and has distinguished him from other leading Fuji acts. Both Pasuma and Saheed Osupa were intimate friends before they both went separate ways as a result of allegations coming from Osupa over Pasuma for stealing his intellectual properties without acknowledgement which is better composed by Pasuma.
After several efforts from Saheed Osupa to stop Pasuma from such unprofessional attitude proved abortive, this made Saheed Osupa to embark on abusive lyrics to tarnish and dethrone Pasuma as a self acclaim wave making Fuji star. The dispute continued with a lot of controversies trailing their individual career as the fans issues.Osupa’s fans hailed the gesture of their artist for his steadyfast in acquiring series of housing properties in Lagos and Ibadan which makes him more superior to other. In fact some of his fans have challenged the inability of Pasuma to release 4 in 1 Cds which Osupa has done with pleasure. However, Pasuma’s fans also made it clear that Pasuma Wonder is the most entertained Fuji artist  that has taken the Fuji music to the highest level. He has being able to infuse hip-hop to the Fuji music which has made the music to be more acceptable.
Another enmity that arose among Pasuma/Saheed Osupa was the sudden Installation of Saheed Osupa as the Olu Omo of Mushin, which is the golden son . This controversial installation created a lot of foes between Pasuma, Saheed Osupa and other Fuji musicians and fans to engage in verbal war.  Some factions claimed that Osupa did not deserve the Installation while other agitated that the Installation came as a result of his hard-work and his ability to promote cultural value.
Both Pasuma and Osupa came into prominence in the early 90’s, since their inception into the Fuji music, it has been one controversy or the other. They battle for album titles, lyrics and the richest person in the industry.