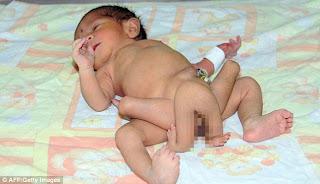 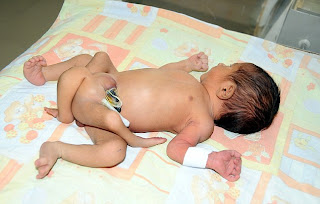 The baby's father, speaking to the news site,Imran Shaikh, made a plea for help from the government and charities.‘I can’t afford to visit Karachi and get treatment for my baby,’ said the X-ray technician, who earns the equivalent of $66-a-month. ‘I appeal to philanthropists and the government to come forward for the treatment.’Shaikh and his wife of four years live in Sukkur, around 280 miles north of where his son is being cared for. His wife is reported to be recovering well from the birth and in a good state of health.
His wife - who is also his cousin - has been unable to travel because she had a caesarean section delivery.
He said they were planning on naming their son Umar Farooq.
In a statement given to the AFP news wire, the provincial health department said: 'The doctors are examining the infant to plan for necessary treatment to save the baby's life and ensure he lives a normal life.'
Muhammad Qaisar, a doctor at Pakistan Institute of Medical Sciences in Islamabad, told the news  he was certain the boy could be successfully operated on. ‘It is perhaps [the] first child in the history of Pakistan having six legs,’ he said.
‘The case will also be a test for doctors and we hope for the better,” he said.
Since Shaikh made his public plea for help, the Sindh Governor has come forward and directed officials concerned to make sure the child receives all the medical care he needs,
This rare condition is thought to have been affect fewer than one in a million babies.
Posted by Ajele1. at 14:20