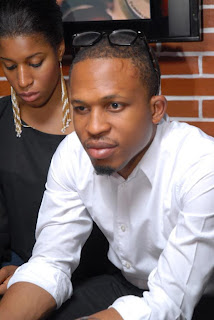 On the 09-04-2012 Easter Monday , is the D-day, as all roads would lead to the East of Nigeria (Owerri, Imo State precisely) is when the handsome 30 year old son- (Naetochukwu Chikwe) of former Aviation & Transport Minister- Chief Mrs Kema Chikwe- Nigeria's Ambassador to Ireland would be sorting out the 2nd part of his nuptial ceremony to his heartbeat and darling that means the whole world to him- Nicole Chukwueke. Just as the whole world is commemorating the Resurrection of our Lord Jesus Christ from the dead in triumph and glory, Naeto C as many know him and his very brilliant love would be sorting out their 'IGBA NKWU' which in Igboland is the most important part of a Nuptial ceremony, this traditional wedding ceremony to the Igbo's is the be it all, some would even prefer to do this and forgo any other.


The Easter Monday, Nicole's dad according to tradition, would pour palm wine for his daughter and she would be asked to go give some to the love of her life, who is her husband to be, once this is done, it's a signal that Naeto is the man that makes her world tick. The wine sharing between the 2 lovers is going to be with some form of drama, once she gets the cup of wine from her dad, she's not expected to just go straight to her man, the drama is her moving around either dancing with her friends till she finally gets to Naeto, who after drinking from the cup, holds his darling and they move towards their parents and the whole family would then pray for them, before the full merriment now begins.
The Lagos leg of the wedding is set for July 21, 2012 and from the feelers we are getting it is planned to be a BIG one. Nicole's elder brother- Ositadimma 'Osi' Umenyiora is the 30 year old Defensive end in the NFL and he plays for the New York Giants, the 2 times Super Bowl champion is expected to storm the country with his retinue of American Super star friends during his sister's wedding. While Naeto C, who is one of the biggest music stars in Nigeria, would be ably supported by all the superstar members of his industry. The Master's degree holder in Energy Studies, Specializing in Energy Economics is said to have chosen very well- according to our very reliable source, who is close to Naeto.
Incidentally, Naeto C and Nicole's elder brother Osi Uwenyiora were school mates at Atlantic Hall, Epe, Lagos before Osi later moved onto Auburn High School, in the US.
While Naeto is a noted fashion buff, we even heard reliably that his eyewear collection is unrivalled by any music star in the country, having many Dita's and Cazals, his love Nicole was at a point into part time modeling and she did well at it. Her dad is the owner of the award-winning auto company-Germaine Auto Centre, whose turnover in 2008 alone was in the region of 11 Billion naira it all.
Posted by Ajele1. at 04:08