A man killed his own son and burn his wife with hot iron. 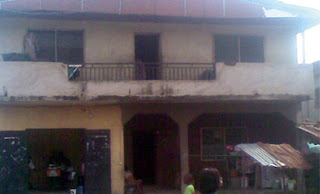 On Easter celebration day, residents of Lambe street,At Ago-palace around Okota area, in Lagos state were a loud of cry suddenly cried out in a nearby apartment where it was latter discovered that a man was maltreating his wife with hot pressing iron and had killed their one year old baby boy by allegedly smashing his head on the floor.
Some neighbours who spoke with Crime fighters  said they heard loud cries from the apartment but no one drew close as they contemplated whether to intervene  the scene or just ignore.
They said some of them latter decided to take a bold step as they noticed the cry was increasing. On approaching the apartment they broke the door and forcefully  went in they were shocked to find that the suspect Mr. Henry Nnamdi had tied his wife to a chair while he maltreated her with a hot pressing iron. They also found the lifeless body of a baby lying in a pool of blood.
It was said that some neighbors who could not bear the shock ran out and contacted the police.

The suspect told the police that he was maltreating his wife for having romance with his own father. The suspect also alleged that the baby was not his biological son.
Some neighbours who reacted to the unfortunate incident said the marriage between Mr and Mrs. Nnamdi had lasted only for two years and wondered what could have gone wrong in the marriage as there have been frequent quarrels in the marriage.
But we are yet to know why the father of the suspect who was accused of having romance with Mrs. Nnamdi expressed shock when he was told that his own son was accusing him of sleeping with his daughter in-law. He said it was an abomination for him to indulge in such act.
He further revealed that he had in time past often advised his son against beating his wife but the son would not listen.
Attempts to speak with the suspect failed as the police insisted that Mr. Nnamdi is not allowed to speak with the press untill he is taken to the State Criminal Investigation Department (SCID) for further investigation.
Presently the  suspect is in police custody while his wife is currently receiving treatment in a hospital. The police also assured that justice must take it full course.

Just stay fellow us up for further information
Posted by Ajele1. at 06:21