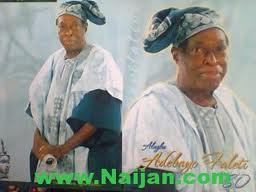 .
An accomplished and renowned poet, playwright, producer, broadcaster and actor, Faleti had started writing poems in earnest and they include Ijamba Odo Oba, Alagbara Ile ati Alagbara Oko and  Adebimpe Ojedokun and more so.

Octogenarian Chief Adebayo Faleti was born on December 26, 1930 at Agbooye, Oyo and lived in Obananko, Kuranga near Oyo, among others places between 1930 and 1939.
He then moved to Western Nigeria Broadcasting Corporation  (WNBS-WNTV) at its inception in 1959 and was there until the corporation was split after the creation of Ogun, Ondo and Oyo states out of the old Western State, in 1976.
He founded the first operatic (acting) group in Oyo, having written and published poems and he won the Festival of Arts award with Eda Ko L’aropin in 1955.
In recent times, the “poet among poets” has featured in many epic Yoruba movies, including Saworo Ide and Agogo Eewo Ite oba, and many more.
He retired as the General Manager of  Broadcasting Corporation of Oyo State (BCOS) a.k.a. Radio OYO, Ibadan. Faleti, who was encouraged by the then producer of Mo Kagoo (I offer greetings), the late Oladejo Okediji, was a pioneer teacher at Ife Odan near Ejigbo, a produce inspector and also practiced as a sign writer when his father, Akanbi Faleti, returned him to Oyo as at 1949.
many people didn't know why Adebayo Faleti wears his Fila (cap) the way he does.The 73 year old actor and culture icon reveled the secret behind his unusual style!
Q=what is the motive of bending your cap sir?
A-Nothing,Is only that I don't know how to style it and with it sewn this long, it is easier for me to just bend it anyhow.
Q=What does your background looked like and do you live happy childhood sir?
A-I grew up in the village and you can imagine how much fun it was. It was so excitement that many children of today are not likely to understand for obvious reasons. I was the first born of my father, so, I had all the attention from them. He would endeavor to put me through all the necessary training and exposure within his power and jurisdiction to make me a proper child and it was all interesting. I was allowed to be part of all the pranks that children engaged in and my ‘sins’ were gladly forgiven. There were rivers to swim in, forests to hunt in, drums to beat and many other beautiful things to remember. There were those wonderful days of moonlight tales when we listened to legendary and thrilling stories that are related to issues of life. It was all fun. My father, for instance, made me to read Yoruba texts and story books to his hearing every evening, this way, I managed to get well trained. He was committed to anything that would make me successful in life. I honestly owe my success to his tolerance 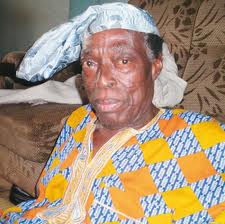 Q=When did you married and your love life sir?  A-I’m an African man and in those days, our styles were different from the way you people do it these days. We weren’t careless and were straight forward than you people. I did not marry early, I think I got married at the age of 30 or so and that was some 10 years after my peers. My mother was worried but like I said, my father was supportive and more tolerant. And you really can’t blame her, she was acting normally; she wanted to be sure that all was well with me. I had almost everything late; education and marriage, but we thank God all has came out well.Q=Are you a polygamist sir?A-No I am married to just one woman. I live with one wife at a time. But really, I would have loved to be a polygamist.Q=But Why sir?A-It is only the best way to manage women. You know, it is only one woman that can inflict any punishment on a man. If they are two, it is not possible. You will simply boycott her room and go to the other. By the time you go to her afterwards, she will welcome you kindly.Q=But fiendish they can plan against you?A-That is not possible. I would not have permitted unity or friendliness between them. I would have made sure they were poles apart and this would disallow them from conspiring against me. The best way is to make them enemies and you will enjoy yourself. I really want to work on a movie that talks about true friendship, true love. The movie will dwell on the recipe for a good marriage which will be based on true friendship. Couples to be should be true friends who are ready to bear each other’s burden. It is good to have your friend as your wife or husband. Friendship should precede everything. That is why the olden days’ marriages lasted longer. The courtship was usually long enough and that availed them enough space to study and know each other well.--- Please tag-along with us for pleasure  updating because your comfort is our concern. .
Posted by Ajele1. at 05:42