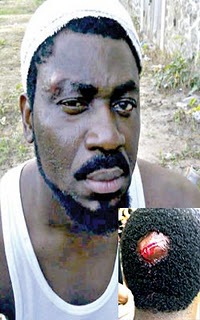 Few days ago, Esteemed actor, Ayo Badmus, alleged that he was mercilessly beaten  by tout guarding the Chairman of Oshodi L.G.A, Hon Bolaji Ariyoh.  Well, the LG boss, via his media people, are denying that they had nothing to do with the beating. They claim the actor had a falling out with some men at the event, and it had nothing to do with them at all.
In a nutshell statement from the office of the Oshodi Isolo Local Government boss.The much spread rumor and campaign of calumny issued by a Nollywood actor, AYO BADMUS, on his alleged humiliation and beating, ordered by the oshodi isolo local government Chairman is nothing but is diabolical  to damage the image of the Honorable Chairman and gain unnecessary sympathy for himself..

The visionary and hardworking Oshodi Isolo Chairman is a core fan of our own  Nollywood stars, someone who always  support and promote our culture both at the local and International . It is so regrettable to imagine how cheap the actor is going around, spreading untrue story and claiming to have been mercilessly beaten by  tout, saying which was ordered by the Chairman's elder brother, a quiet, reserved and friendly fellow at the Chairman's Sallah celebration that attracted the presence of notable Nigerians like Gbenga Adeyinka 1st and some others eye witnessed who attend the occasion and could testify  to the truth. We however found it necessary to address the issue and correct whatever ill impression that would have registered in peoples mind and confirming the story as untrue and unfounded.