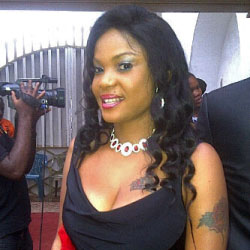 Iyabo Ojo, Erudite Nollywood producer and also an actress, is one of the most controversial actresses in the Yoruba movie genre. A graduate of Estate Management, from the Lagos State Polytechnic is a single mother of two.
IY Sexy, as she calls herself on her Blackberry display profile, is undoubtedly one actress who interprets her roles perfectly. However, she is also very controversial. In this interview with Senior Reporter, Anthonia Soyingbe, she spoke on her new movie, ‘Arinzo’ as well as everything that makes her tick. Excerpts:

Q=What are you plans for?
A-I just finished work on my multi-million-naira project, a movie I title, Arinzo! A Yoruba and English speaking motion picture, featuring the best of Nigerian and Ghanaian film stars, will be shown in cinemas early next year. I also plan to make a comedy movie in January.
Q=Arinzo? Gollywood acts? Sounds like a big departure from your regular films. What is unique, special and different about this film Arinzo?
A-You are right this is different. It is an action movie, which addresses the issue of honesty. In bringing Nollywood and Gollywood acts together, I aim to create a kind of unity between the two countries. Irrespective of our different countries we remain one. Arinzo is the nickname of the lead character.
Q=The production of Arinzo must have gulped a lot of money. Can you tell us how much you have spent in making this movie?
A-All I have  to say  is that I spent millions of Naira. Frankly speaking  am not exaggerating cost in producing it because I want the best. God used Corporate Pictures and me to make this project a reality.
Q=Dow did you got into the movie industry and what fascinated you to go into the industry?
A-In 1997, I went to Aunty Bimbo Akintola to indicate my desire to be an actress like her.  In her magnanimity, she introduced me to Actors Guild of Nigeria (AGN). In 2008, I had an offer to act in a movie titled Satanic, in which I was given a subordinate role. When I got married in 1999, I stopped acting when I gave birth to my son and came back in 2001 after the birth of my daughter.
I left AGN to join Association of Nigerian Theater Practitioners (ANTP) through the Odunfa caucus. In 2002, I featured in Baba Darijiwon, produced by Yinka Quadri and in 2004 I produced my first movie titled Bo ti fe. Ever since then I have not looked back as an actress and as a producer. Watching Bimbo Akintola in a movie titled Out of Bound I won’t deceive you propelled me to go into acting.  In Out of Bound propelled me. I have produced 12 films till date.
Q=Who are your close pals in the industry?
A-To me I am close to everyone who is not highly and mighty
Q=Twelve films? Fame must have earned you lots of money.
A-Ho I don’t know about that o! All I can say is that I am okay am not begging,
Q=Do you have any high point in your acting career?
A-I haven’t reach there yet, But working towards that.
Q=What do you consider before picking up a script?
A-The storyline is very important to me I just don’t pick up a role; I study and rehearse well before doing it.
Q=How has fame affected your relationship with people?
A-I personally don’t take people for granted and I will never take people for granted. I still interact with people very well. I so much cherish my fans.
Q=What is your take on sex for role in the industry?
A- I never have such experience and that will never happen to me.
Q=Considering you’re preoccupied with your work how do you create time to attend to your children?
A-I do my best to be a good mother to them despite my very busy schedule. As much as possible, I devote time to attend to them when I am not on set.
Q=Considering you having an issue with one of your colleagues, and seem to be getting messier by the day. Is there any sign of peace?
A-No comment on that.
Q=You talk about your dance school, why dance school and not acting school?
A-I have a group known as Future Stars. I educate, motivate and train those who want to go into acting. I also organized seminars for them and I invite my senior colleagues to come and address them. My dance school for kids was established because of my love for children and dancing. The Non-Governmental Organization (NGO) is known as dancing to save a soul. We have children between the ages of three to 15. We teach, train healthy and privilege kids to dance. I take them out to the less privileged and other homes. They interact, learn and play with inmates of such homes. With that they appreciate them and we entertain them. We will visit a home for children with Down syndrome on my birthday, December 21.

Q=How do you react to negative reports?
A-I am very strong; I never allow such report to move or change me no matter what the negative story they publish about me. I am still going to be loving, friendly, kind and down to earth. In all these I won’t still take nonsense from anyone. I don’t disrespect anyone and I never look down on anyone, so I won’t allow anyone to disrespect me.
Q=Are you planing to remarry?
A-If my better half comes knocking on my door I will open my heart for him.
Q=Do you have anyone keeping your company for relationship and what are the qualities you want in your idle man?
A-I am in a relationship with a very wonderful man who loves me and my kids so much. In return I love him so much but we don’t have any plan for marriage yet. Honestly I am very happy with him in my life. My ideal man is a God fearing man, honest, handsome, very understanding, caring and giving. My man is an embodiment of all these but we are not planning marriage now.
Q=His he  an actor?
A-No he is not in the industry at all.
Q=You had a privileged background, can you tell us about your growing up days?
A-My growing up days were great, I had a normal and beautiful upbringing where everything I needed was always provided for me. I never knew what poverty was like and I was a very happy child growing up in a lovely home. When I was a teenager, my grandmother who was a great cook ensured I spent my free time in the kitchen, learning how to cook.
Q=Can you still cook well?
A-Ho Very well am marvel in cooking, and neatness is my other name. I learnt neatness from my aunt, Aduke Obey-Fabiyi, my late dad’s sister.
Q=Don’t you think it is inadvisable for you or anyone to insist that a fellow colleague should add the appellation ‘aunty’ when addressing you?
A-When you say colleagues, remember that we have junior and senior colleagues. You don’t expect me to call Aunty Bukky Wright her name just because she is my colleague or do you think it is right for Aunty Bimbo Akintola to call Aunty Joke Jacobs by her name because they are colleagues? Please Thonia answer that question. Respect is part of my culture as a Yoruba girl and it is very professional in ANTP to respect our elders. ANTP’s anthem also stresses the importance of respect among junior and senior practitioners. I still insist and maintain my ground.
Q=Can you takes on unhealthy rivalry in the movie industry?
A-It is beyond me and I won’t like to talk about that.
Q=His your relationship now like the one with your ex-husband?
A-We are very good friends.
Q=Which movie brought you to limelight?
A-Oga and Ife odale launched me to limelight. These movies were released the same day.
Q=What will be your advice to up and up coming artistes?
A-They should believe in God and believe in their ability. Dedication, hardworking and humility are essential in this profession. They should also join the right caucus. Being in a caucus helps you to gain acceptance in our industry, it also gives you a sense of belonging.