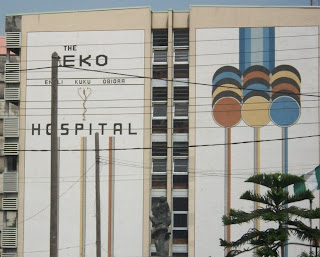 This life is full of mystery,When Mr. Oke was rushed to the hospital for treatment, his family received the shocker of their lives when they were informed that their husband and daddy was three months pregnant.
The annoyed family members took their ill family member to a nearby hospital,Eko Hospital took blood samples of where he was diagnosed with typhoid fever, and after which he was treated and is today hale and hearty.

At Eko Hospital such has been the rot that has befallen the once prestigious. A recent visit to the Bank Anthony way premises of the hospital showed a clear lack of interest by the Kuku family who co-own the hospital. The nurses are not even showing enthusiasm in discharging their duties and their so-called private wards are in bad shape, which makes one wonder if any of their upper class customers still patronize them.
Short trip to the place and the stench that greeted us were enough to turn back a new customer, while an old customer coming for check-up would wonder if he or she wouldn’t contract a new set of diseases. Unlike other high-brow hospitals, the environment is not conducive and one begins to wonder if the Kuku family have suddenly run bankrupt to the extent of allowing the hospital to decay to that level.
This hospital, co-owned by Drs. Eneli, Kuku and Obiora – coined EKO – was the toast of many and could be said to be in the same league with hospitals like St. Nicholas. But the situation of things at the hospital has turned from good to worse. The building even looks like it needs attention and the administration really needs a shake. Investigation revealed that those supposed to be manning the hospital are those that do not have a flair for it.
we learnt, has been causing systematic withdrawal of even the once very loyal patients of the hospital.
It is the general belief that it is a matter of time before the once highly regarded hospital becomes a disaster as the present situation.
Posted by Ajele1. at 02:01