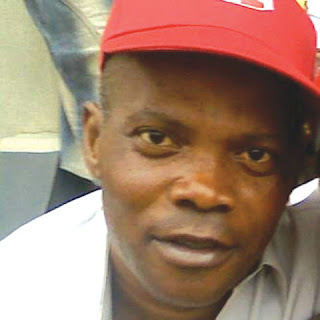 Yoruba actor, Rafiu Olalekan Oladipo a.k.a Georgio Lekinson who died on Wednesday at the age of 54, in his hometown Osun Osogbo, State, Nigeria
As a result of Sources disclosed that the filmstar actor of Yoruba classic, (Koto Aye) had been contended  with a terminal cardiovascular condition for over four years back.
Amidst tears and wailing, the remains of the Yoruba actor was finally laid to rest this Thursday according to Muslim rites at his home in Oke Ayepe, Osun.
The Oladipos’ residence was besieged by a huge crowd comprising family, friends and fans who had gathered to pay their last respect to the fallen hero. In attendance was the wife of the late actor and two children as well as his colleagues in the world of acting.
“We were astonished  at the show of love by the people during the burial”, said Ayo Oladapo, former General Secretary, Association of Nigerian Theatre Practitioners (ANTP), Osun State chapter.
“Right from the mortuary at Ladoke Akintola University of Technology Teaching Hospital (LAUTECH) on Ajegunle Street in Osogbo to the house of our late colleague in Oke-Ayepe area, the crowd was massive. We barely had a space to move the corpse through. This has gone to show that Lekinson touched the lives of many people through his movies. Nobody is happy about his death,”Oladapo added.
Prior to his unfortunate death, EE investigations revealed that the actor was hospitalised for several weeks in October last year when his condition aggravated but was later discharged as an out-patient and placed on regular medication.
We learnt that it was his terminal ailment and was an open secret that got to the notice of Osun State Government during the ousted Olagunsoye Oyinlola administration. To alleviate his condition, the governor had provided a passive job for the actor whose proceeds would cater for his medication.
But all that changed with the coming of the current administration led by Governor Rauf Aregbesola. Left with nowhere to turn, sources confirmed that the actor resorted to begging from family and friends to be able to cater for his medication.
Meanwhile, the leadership of the state chapter of ANTP has pledged to foot the outstanding bill incurred by the deceased actor at the government-owned teaching hospital. EE learnt that doctors at the hospital insisted on the payment of the outstanding bill incurred before his corpse would be released, but it was eventually released after much assurance from the ANTP.
May his gentle soul rest in-perfect peace!
Posted by Ajele1. at 03:24