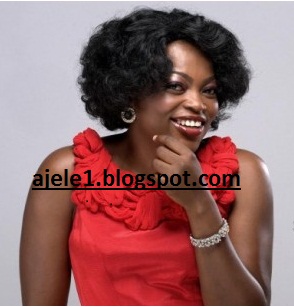 Akindele Olufunke Ayotunde (popularly known as Funke Akindele, born on August 24, 1976 in Ikorodu, Lagos , Nigeria)  In 2009 she won the African Movie Academy Award for Best Actress in a Leading Role.she has raised the stakes in the movie industry. She went into the movie industry with a mindset to educate and add meaning to the life of her viewers. The lawyer-turned actress has carved a nitche for herself in the movie industry and is well known for her humorous roles in movies. She recently released Part 2 of the blockbuster movie,Omo Ghetto which has since caught the attention of viewers at home and abroad.The highly educative and insightful movie sheds light on how a life lived in the ghetto may not necessarily be a wasted one,and how such a life can be transformed into a meaningful one. She co-acted the lead role with professional acts like Eniola Badmus,Ireti Osayemi,Adebayo Salami,Ronke Ojo,Peju Omobolanle,Bimbo Thomas,Segun Odegbami,Sola Asedeko an
d host of others who featured in the highly successful Omo Ghetto 1. To further drive home her point as an entrepreneur with sincerity of purpose,she featured celebrities who have inspiring stories: The likes of mathematical Segun Odegbami,the great footballer in the 70s/80s,Tara Durotoye,the renowned make-up artist,Falilat Ogunkoya,a great sprinter,track queen in the 90s,Mocheeda(award-winning musician),Bash Ali,the ageless boxer,and Jerry,the renowned hairstylist. In the movie,they lectured and gave motivating tips on how to face the challenges of life and achieve the best of it.They also supported Funke Akindele through their individual foundations to provide jobs and scholarships for the less-privileged. It is no doubt scintillating star actress, funke akindele, is one the most successful actress that ever surfaced from the land of Nigeria. Her acting skills and achievements in the screen business implies that dearest funke Akindele, is an influential entertainers who is capable of initiating influential individuals

Omo ghetto is a movie which unveil the activities of people living in a slum areas with special talents deposited in them, will remain forever the toast of movie fans nationwide.


she is also in top excel huge achievement in the folder of the highly profiled and creative film maker, funke Akindele, is her inclusion into the Oscar nomination award in African category.
2011 Screen Nation Film and TV Awards tagged as Uk Oscars just revealed the nominees for this year’s award. This is the first time African films and actors are receiving nominations from the highly coveted awards which means African films have started gaining good recognition worldwide.
Nollywood and Ghallywood are the two major movie industries in Africa right now and the two will battle for the prizes as Omotola jalade, Genny Nnaji, Jackie appiah ,Ama k ,Mercy Johnson ,Funke Akindele battle for favourite west African Actress.Leading actress and Glo Ambassador Funke Akindele is currently the most sought-after bride in Nollywood.The star has become a hot item for uncountable of bachelors since she ran a story on her entitled: men still counting Pray for me to be frank I need a man.Since the story simultaneously hit newsstands nationwide and the internet, passionate reactions, basically to me she is kind caring god fearing person to say!!!