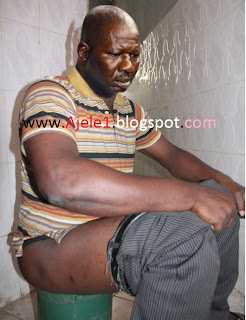 
The arrest of the entertainer, who is fondly called Baba Suwe by many people, and has also spent over five decades on planet earth, was based on an alleged ingestion of substances suspected to be hard drug.
His alleged drug case drew international media attentions, after he was in the custody of the drug agency for over 24 days without any drug found on him. With over three excretions, he was still not charged to court for any offence.


It took the court to order his eventual release from the NDLEA on November 4, 2011, after his lawyer, Bamidele Aturu filed a court motion for a violation of his human rights by NDLEA.
The court also ordered that NDLEA to pay the sum of 25million naira to the actor, who has spent almost 30 years in the acting career .
recently was TV show monitored by NigeriaFilms.Com, this Lagos State born veteran actor made it known that the NDLEA has still not obeyed the court order by paying him his compensation of 25million naira.
In his words, “I have not received any money from the government.”
Speaking on his worst moment in life, Baba Suwe said, “My worst moment in life was the drug case I was alleged of [ingesting cocaine] by the National Drug Law Enforcement Agency (NDLEA).
“I was alleged of a case I knew nothing of. It was a sorrowful experience that the world knew about. It is natural for people to talk about you. To those who never liked you; they would believe you do drugs to earn a living. In all, I give thanks to God everything,” he recounted.
On whether he would do a movie based on his experience with NDLEA, Baba Suwe had this to tell the world, “I must do a movie on my alleged drug saga. As long as I live and breathe on this earth, I must put it in a film for people to watch and learn from.”
This statement by Baba Suwe would come to his numerous faithful fans, who had wanted to know if he would release a movie on his NDLEA saga, just as fellow actor, Yetunde Wunmi, did after her drug ordeal with the same agency.
Posted by Ajele1. at 05:11