fuel truck full off bridge and burst and catches fire. 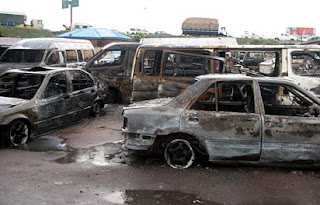 An explosion triggered by a fuel truck which fell from a bridge before bursting into a ball of fire rocked at mile(2) Two area of Lagos yesterday afternoon.
In the incident three people where confirmed dead,The truck fell into a motor park and about 200 vehicles of different brands were razed in the incident.
This tragedy incident occurd at 1.30 p.m.
As victims counted their losses yesterday, residents said the tragedy would have been more had it happened during day time.
Lagos State police spokesman, Mr.Joseph Jayeoba, said the driver of the ill-fated truck was not among those that was killed,stated he was on the run.
Eye witnesses said the truck, bearing product suspected to be petrol, fell off the Mile Two bridge as the driver attempted to descend to link to Orile. Motorists plying the route at that time hurriedly made a u-turn.
burnt Vehicles include those of transporters plying the eastern and western parts of the country. Sunday Vanguard learnt that those killed were sleeping inside some of the parked vehicles and kiosks in the garage.
Eye witnesses said the fire would not have spread to the garage where the razed vehicles were parked sussposing the fire service arrived on time. But the officials upon arriving the scene could immediately not contain the situation following the magnitude of the fire. There were reportedly over fifteen fire service vehicles around the area battling to put out the raging fire.
The incident caused heavy traffic as motorists plying the route were trapped as early as 5.30pm. But the joint effort of policemen and officials of the Lagos State Traffic Management Agency (LASTMA) eased the traffic situation.
One of the eye witnesses,gave his name as Nosa Esemuede, How we escaped death a driver who plies Lagos – Benin route and said the ill-fated truck was marked, XB370ATN.
He confirmed that three charred bodies were immediately recovered from the buses in the garage, while several other victims sustained bad injuries.
“It was just that God saved my life and My own bus, the bus I drove from Benin City to Lagos yesterday (Friday) evening, has been burnt to ashes and all those people who lost their lives were those people that slept in their buses.
“The garage is where we load our passengers and park our vehicles. If we are not going back that same day, maybe be for time or no passenger, we stay there. Yesterday (Friday) night after parking my bus I went to settle a misunderstanding within my family. That was what saved my life,” he said. Trapped in inferno
"Mr. Kazeem,"who is also an eye witness,said he escaped the death in the accident by whiskers, pointing out that the situation would have been avoided if the tanker driver now at large had listened to the advise and warning from people.
According to him, “ We were more than 30 people at the park at that time, because most of us who leave for inter- state trips depart early and most time we sleep in the park to enable us leave early the nest day.
“I have just finished eating with some other people in the park here when we noticed the tanker in an unstable position. I quickly ran to the scene and told the driver to stop moving because I noticed that one of the tyres was off the road. I told him to wait while I get people to help.
”Mr,Kazeem lamented that the berserk tanker driver ignored his plea and went ahead to move the truck.
“The next thing I heard was a loud sound behind me and when I turned, I saw fire. It was so bad that all I could do was to rush to the park and alerted some people who were sleeping and we all ran out of the place.”
Amid lamentation he explained that three of his colleagues that died were fast asleep and were trapped in the inferno.   learnt that many of the drivers who parked their vehicles after close of work, on Friday, returned yesterday morning and see that their means of lively hold had been ruined by the fire.
Posted by Ajele1. at 04:00