12-year-old son caught while sleeping with his mother. 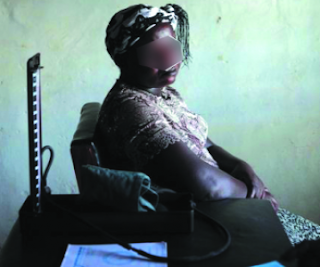 This incident was reminiscent as a scene from the pages of Ola Rotimi’s The Gods Are Not To Blame, where the protagonist, Oba Odewale, Diabolically sleeps with his mother whom he married after killing his father.The real-life incident, which has similar elements minus the tragic aspects, took place at No.17, Ibisayo Street, Oke Ota-Ona, Ikorodu, a suburb of Lagos, when the residents of the street caught a 52-year-old beggar red-handed having sexual intercourse with her 12-year-old son. The beggar whose first name is Borom and her son, Igbinta, we learnt that she usually walked around the street and its neighbourhood begging for alms.

Due to what we gathered from eye witnesses, this incident occurred  at dusk. The deviant pair was allegedly caught by a passer-by, who hearing excited moaning coming from inside the makeshift shelter where the beggar and her under aged son lived, decided to investigate the noise and to his shock discovered the shameful act. One of the residents of the street, Okore Lawrence,narrated the story to us: “They were discovered by an elderly man who was passing through where Borom and her son occupied.  The shelter is an open place that has only a roof covering it.”
This woman might been insane or suffering from any disability, Lawrence provided further insights. “She is hale and hearty. To the best of my knowledge she has been living in this pool circumstance  for about two years back. With this abominable act, she will be immediately sent away from this place” he affirmed.
Rather than deny that such unholy act occurred, or show remorse for her shameful conduct, the Adamawa state-born woman was alleged to have said: “It is nobody’s business”.
Appalled by the sleazy act, the crowd that gathered around the scene of the incident was so enraged and forced her out of the wooden shelter. Efforts to ascertain whether the son consented to the act by the eye witnesses proved futile as he was said to have fled as soon as they were caught red-handed.
This shameless mother is also alleged to be on the run over fears of mob action.
Posted by Ajele1. at 03:07