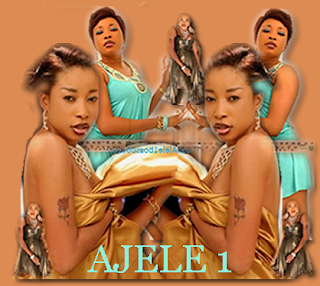 Another tragedy was recently averted in Abeokuta on the set of Anjorin’s new comic flick, entitled: Miss Tinubu, when production was suddenly halted after the shoot of only one scene.
Lizzy was recently hit by a sudden mysterious illness.
That defied medication but was later rescued by a relative who quickly took her to spiritualists in Abeokuta.

The situation has degenerated into a cold spiritual war of attrition involving an exchange of fetish powers otherwise known as Juju.
And this cause allegations that Iyabo Ojo was responsible for Lizzy's illness.
Meanwhile Anjorin has been warned to embark on serious prayer and fasting to avert a spiritual attack  from the camp of her public enemy said her pastor. An anonymity  close to Anjorin disclosed to us that the actress has been experiencing some strange occurrences for a while but she take no notice.
Posted by Ajele1. at 04:23