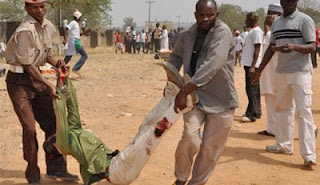 A week back after about 100 people lost their lives in the blasts suspected to have been perpetrated by the dreaded Islamic sect, Boko Haram in Damaturu, Yobe State and Borno State, federal government establishments, including the Force Headquarters in Abuja were yesterday tightly secured by security operatives.


Super armed security personnel were seen diverting all vehicles away from the Force Headquarters and other key building in the Federal Capital environment .
Today checks revealed that some Boko Haram members had on Thursday night sent a warning letter to the Police, threatening to bomb the Force Headquarters, as well as federal government establishments in Abuja and its environs. Security operatives in large number, especially Anti-Bomb Squad team were seen all over key offices and government establishment in Abuja, diverting all vehicles from the front of the buildings as far as two kilometres away from those buildings.
And vehicles were not allowed to park near those buildings, while workers and visitors to the buildings were subjected to intense screening before allowed in.
After visited some of the establishments, it was like the proverbial camel passing through the eye of a needle. At a point, the security checks at the entrance to most of the buildings became unbearable.
Posted by Ajele1. at 02:15