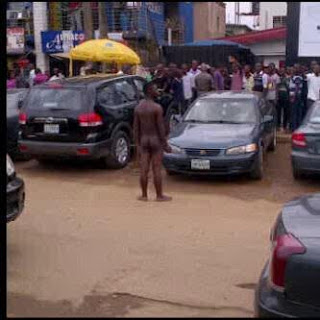 Good day to you reads, we brought this scenario to you  about an anonymous young man who run mad      yesterday @ Ikeja.
Eye witnesses stated that this young man jumped off  his Range Rover and started madness display, onlookers encircled  him. he started displaying series of madness, pulled off his clothes, jabbering  numerous  words
The young man is aggressively  rumored to be a YAHOOO YAHOOO boy, slang for boys doing Internet fraud, while others saying he may be one of those called ‘Yahoo Plus’ boys, which means he has gone beyond ordinary scam, he has added charm known as JUJU in Nigerian's native  language, to his internet fraud , how the fact has not been ascertained yet, maybe be he  his under spiritual attack.
Posted by Ajele1. at 03:24