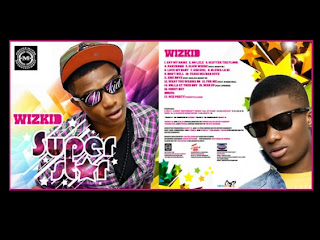 Meteoric rise of Empire Mates Entertainment's cash cow, Ayodeji Ibrahim Balogun better known to music lovers  Wizkid didn't come as a surprise for those who have been following his progress right from when his promo singles named Holla at your Boy, Don't Dull, and Tease Me, started to get massive airplay.


Seeming experience and networking strength of his forerunner and EME C.E.O Banky W has positively rubbed on Wizkid's debut album aptly titled Superstar. Little wonder the fast rising artiste emerged winner at the 2011 MOBO awards Music of Black Origin in Scotland; he also emerged winner in the Next Rated category at the edition of the 2011 Headies.
Due to the fact that some close watchers feel that most of his songs on the album seem to have the same melody and the fact that the artiste intends to be somewhat acerbic with the lyrics of some songs there seems not to be any major flaws noticed on the album.
The album also prides itself of having the largest collection of commercial songs eclipsing the likes of P Square who before now reigned supreme with their sing along songs especially during the festive periods.
Debut Wizkid's album collection features 17 endearing tracks that has made the artiste one of the most sought after acts in the land. From the very stimulating song named Scatter the floor the controversial (Pakuromo)   music fans seem not have enough of Wizkid's debut collection of songs.
Therefore It is also needless to say that the production imprint of emerging music producers such as E Kelly, Jay Sleek, Samklef, Shizzi, DJ Klem and Veebee on the album has inevitably shot Wizkid's sound impression outside the shores of the country while announcing him as the new Sherrif on the Nigerian music scene.
Posted by Ajele1. at 02:47