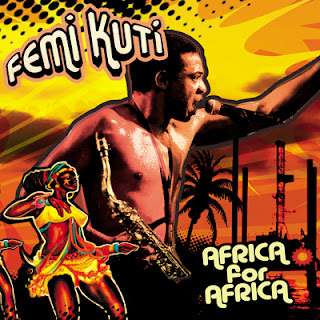 Esteemed Nigerian musician Afrobeat singer, Femi Kuti has been nominated at the 54th edition of the prestigious Grammy Awards.
Femi Kuti elevated his 3rd ever nomination in the World Music Category for his ‘Africa for Africa’ album

2011,30 November when the list was unveiled at the Grammy Nominations Concert Live! In Los Angeles, US.
In 2003, Femi Kuti, eldest son of the late Afrobeat pioneer, Fela Anikulapo Kuti elevated his first ever Grammy Award nomination and lost out to Panamanian salsa singer, Ruben Blades. He almost  lost in 2010 when he was nominated in the same category. US banjo player, Bela Fleck gone off with the award.
But his recent nomination sees him up against Latin/Roots music band AfroCubism, South African male choral group Ladysmith Black Mambazo, and Malian band Tinariwen.
However everybody are deeply and delirious  happy for him and wished  they give him the award this time around.
By Ajele1.blogspot.com.
Posted by Ajele1. at 04:38