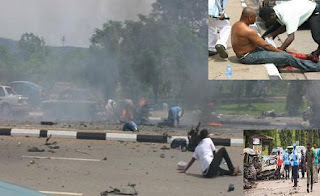 This event occurred on Wednesday night and up to 20 people were injured in the explosion.The Manager of the hotel, Mr. Ojiego Nelson, told the News Agency of Nigeria in Gombe on Thursday that three persons came to the hotel at about 10.13pm on Wednesday night to explode a device.Nelson said he was at the gate of the hotel when the men, who were carrying guns, started "manhandling" the security man
said,
"When he asked what was happening, they started shooting sporadically."Our customers and everybody started running helter-skelter and the one with two gas cylinders in his hands threw them into our reception."He threw one into the reception and threw the other one under the cars parked by our guests in the hotel."The one thrown into the reception exploded and damaged the building, so we just managed to escape through the back fence."The manager said as soon as the incident happened, all the customers vacated their rooms in the hotel.He said the incident was immediately reported to the Divisional Police Officer in Tumfure, Mr Hassan Bappa, who came to the scene with his men.
Bappa told NAN he moved his men to the scene of the incident when the matter was reported to him, but said the gunmen had escaped before the police arrived. Bappa said there was no casuality and nothing was stolen from the hotel. "We are waiting for bomb experts to come and remove the relics at the scene of the incident," he said. He said there was no arrest made so far but investigations were going on. Meanwhile, the Chairman, Senate Committee on Petroleum (Downstream), Senator Magus Abe, on Thursday in Lagos called for political support for security agencies to reduce the spate of bombings in the country. Abe (PDP-Rivers South-East) made the call in an interview with the NAN, urging the security agencies to be persistent in handling the incessant bombings by the fundamentalist Boko Haramsect.
He said, "The security agencies need full political support of the leadership of the country and the communities; besides, they need to be focused, consistent and avoid distractions. "The Boko Haram issue is a challenge that must be overcome. Take for instance, there was a time in Israel when bombs were going on everyday but today they have overcome it.’’ The senator advised the country’s leadership to be courageous in handling the present security challenges facing the nation. "The Boko Haram issue requires leadership and total courage, courage on the part of the leadership and the leadership must adopt the consistency approach," he stated.
Posted by Ajele1. at 01:56