Mother of the Yoruba Actresses,Iya rainbo detested tattoos on filmstars. 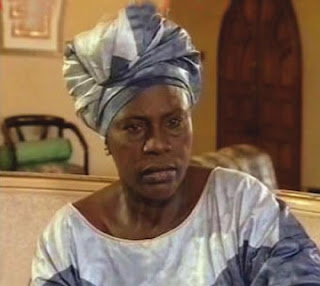 Veteran actress, Idowu Phillips,popularly knows as Iya Rainbow,said that the life styles of the new generation actresses  and actors were the reason why she was absent from the screen for some time back.

"Apart from that, I have decided to select scripts myself. I cannot just be feature in any movie for now.
Stated that she did not like what the new film stars were doing and complained guiltily  about the tattoos on their bodies.
The actress attributed her success to her dead husband, adding that she almost quit when he died. "I almost quit acting when my husband died. I told people I that am going to quit and they urged me to go on. During the time, I had a dream where my husband told me to continue acting. He said I should continue with his legacy.
I thank God because today I am now a household name,"said Iya Rainbow.
Posted by Ajele1. at 03:50