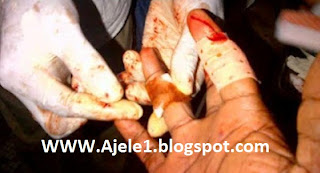 The name Jim Iyke has hit the ring-bell again.

The news escalate from car ownership controversies to N15m fraud allegation, then came news that he was beaten by military men in Cameroon.
In a phone controversies with Stella Dimokokorkus, Jim Iyke spoke. According to him, "I was not beaten by anyone, I have heard that and its a big laugh."
Speaking further, the aggressive actor stated, "If I was beaten by soldiers like is being wrongly speculated, how come they only beat up my fingers and not my face or body? It is a big joke," Jim said.

He has  claimed to fell on a glass table while trying to escape from fans that encircled  him in a club. He said he only got treated for cuts on his fingers from the glass table.On N15m fraud allegation, which he has already begged to be settled out of court, Jim blamed the case on himself.
"In fact,  the N15m alleged fraud case, escalated because I stubbornly refused to iron things out. But the lady in question is my sister's best friend and we have sat down like a family and settled the issue out of court. We remain friends and family," Jim Iyke confessed.
Speaking over  his car issue, Jim Iyke said he still awaits anyone to come up to claim ownership of the cars in his garage.
Meanwhile we heard  that Jim Iyke was on bed few hours ago in Limbe, Cameroon, where he was  injured and receiving treatment.We gathered that Jim Iyke is in Cameroon shooting a movie, Blood or Wine alongside Uche Jombo.