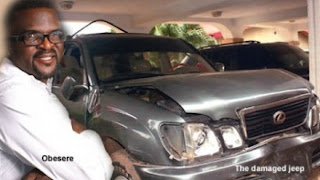 Fuji musician, Abass Akande Obesere receiving treatment  at a private hospital in Lagos after being involved in a  motor accident on Easter Sunday April 8, 2012 in Ijebu-Ode, Ogun State, Nigeria.

Report to us that Abass  was  returning to Lagos Ijebu Ode around 8:30pm from a performance engagement in  when his driver, Femi, lost the control of the Lexus jeep LX470 and careened into the bush where it rammed into a tree. Though all the occupants of the jeep, four of them, including the musician were injured, but The shout of Hallelujah was on the lips of friends and family members of self-styled Paramount King of Music no life was lost.
Abass  said in response to the news that.
“Femi doesn’t take alcohol and when we go to shows like that I always give him time to rest and he doesn’t partake in our music performance. I was even having a phone call with my eyes gazed at him when the jeep swerved into the bush. It was a terrible occurrence, but I thank God that nobody died.”