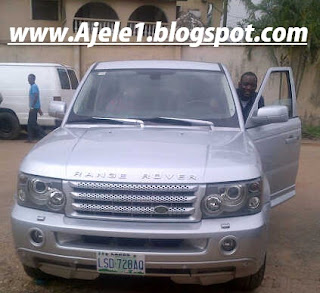 Esteemed Fuji Star, Wasiu Alabi Pasuma Wonder knows as the only entertainer  acquired, latest Range Rover SUV. The fuji rave took delivery of the car and have been painting the town red with it.
in addition Lagata the golden son 1 has penned a liquor deal with Regal Dry Gin. The contract is said to be a 36-month deal, which will be in form of endorsement by the fuji star.
Unconfirmed gist says that Alabi has a deal with brand of liquor drink which also include TVC and print adverts for Regal Dry Gin. The month involved in the deal runs into millions of naira.
From the stable of Ajele1.blogspot.com Alabi Pasuma has been nationalized as number one citizen of Mushin!!!   Musician
Posted by Ajele1. at 08:48